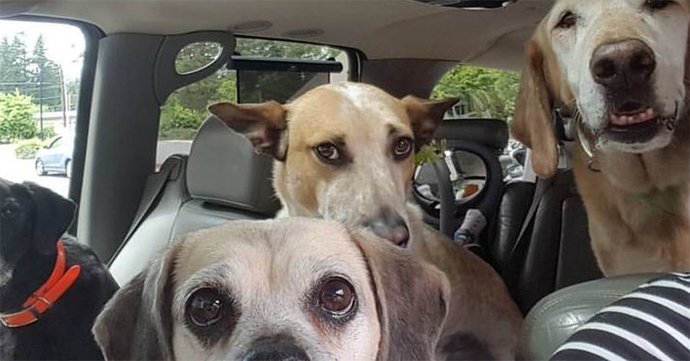 Sunni Liston, owner of Dogpatch Resort, panicked when her van full of dogs was stolen right in front of her eyes

PORTLAND, Ore. (KOIN) – The owner of a dog day care center and boarding school experienced sheer panic this week when a thief stole her van – along with the dogs in the house.

Sunni Liston has owned the Dogpatch Resort for nearly 20 years. She said it was more than just business for her – it was “an extreme passion and love”.

Liston said they collect dogs from their owners in downtown Portland along NW 13th Avenue on Tuesdays, Wednesdays and Thursdays. On some days, more than two dozen dogs in Damascus could run around their playgrounds between the two transporters of the Dogpatch, each holding 13 kennels.

At the end of the day, Liston and her team clean up the dogs and load them back into the vans and take them back to downtown Portland.

But the unthinkable happened when she brought the dogs back to town on Tuesday.

“I park in parallel on the street and people come to me and get their dogs. So I sit in my van for about an hour and when everyone comes I unload the dog, ”Liston explained. “One of the first customers came around 10 a.m. around 10 a.m. I went to the back of the car and got out of one of the top kennels, handed her dog and she started walking away and the van started. “

It took Liston about a minute to give the customer her pups. A man had climbed into the driver’s seat and drove off in the van while Liston stood by.

“It took a split second to realize what had happened and I screamed. I can drive up the side of the car, the driver’s side, and I hit – I tried to get to the door. I hit the wall of the van and it ran over my foot, ”she said.

“I screamed ‘Call 911, the van is stolen, stop it.’ I didn’t have a phone, my phone was in the van, “she said. There were 11 dogs in kennels in the van plus her own dog, Howard, who was loose in the front seat.

But Liston’s stolen cell phone turned out to be her salvation. Her staff were able to call the location of the phone, which showed them the van was in a parking lot in SW 13th and Jefferson.

“You would never have seen it from the street,” Liston said of her stolen van. “The amazing girls who work for me called a friend who lives on the 13th and Jefferson and said, ‘Get in your car, you need to find this van.'”

Liston said the friend of her employees found the van and prevented it from leaving the parking lot with her own car. In the end, the van was missing for about 40 minutes.

“There were literally hundreds of people – and that’s no exaggeration – ready to search the streets for this van,” Liston said.

As for the thief, Liston said he didn’t stick with it. But the authorities at the scene found all the dogs still inside unharmed. The relief Liston felt was priceless.

“The policeman called me and I could hear the dogs in the background,” she recalled. “I screamed, I screamed, you got her, you got her! – It wasn’t anything that could be described. “

Liston said she has received a lot of support since the ordeal. She said the police hope to catch the thief – who also stole the money in her purse and tried to use her credit cards. One witness described the thief as a man who looked homeless, with “stranded hair” and a blue coat and red backpack, Liston said.

“Apparently, napping with dogs in Oregon is just as serious as napping with people. It’s a very serious crime, “Liston said, adding that police told her on Wednesday that they are actively pursuing the case. She said they plan to put GPS trackers in both vans and use thugs on the steering wheels.

These Are the Most Obedient Canine Breeds

Myra Ritchey - February 2, 2021
0
Move aside, Punxsutawney Phil! Two Pend Oreille Prairie Dogs, Snowy and Flurry, have their own predictions of how much longer winter will be. ...