Images and videos of US military dogs leaving Afghanistan sparked a lot of outrage. It seems as if the dogs are being given seats on evacuation flights while many humans are still stranded there. Many questioned why the dogs were given priority over some people, but others argue that the dogs have a right to be on the plane too.

All the information about this situation hasn’t been shared publicly yet, but people are still jumping to conclusions. Of course, both dogs and humans deserve to fly to safety, but the current method might not be ideal. Here’s what the media has revealed so far. 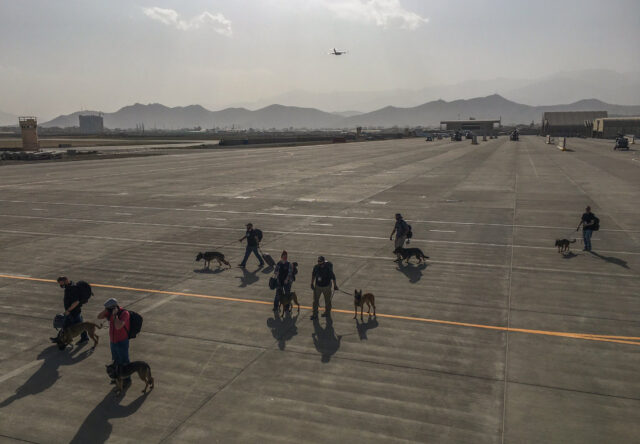 US Military Dogs Flown to Safety

Videos and images show dogs in Afghanistan waiting to board the plane with their handlers. Other photos show dogs sitting in their own seats in the cabin. Of course, it’s a good thing that these dogs will get to fly to safety. Yet, in this scenario, it made many people question the country’s priorities.

Many humans who have helped the US for many years are desperate to leave Afghanistan. They believe their lives will be at risk if they remain there for much longer. Many people have been so frantic to leave that they’ve reportedly grabbed onto the plane’s wings only to fall to their deaths. With that in mind, many people questioned why the military dogs got so much space on their flight.

“The US military has managed to evacuate their Service dogs in Afghanistan. They all got seats in the plane, but innocent Afghanis hang onto the [tires] of the same plane and fell thousands of feet to their deaths. Let that sink in!” a Twitter user wrote.

Of course, it isn’t possible to safely fit every person and every dog on a plane. But perhaps there could be some sort of compromise to fit more humans on the plane. However, it’s unclear if the social media accounts got their information from credible sources or not. Humans are Still at Risk

Twitter users were quick to pick sides in this scenario. Most were furious that the working dogs were prioritized over the humans working with the US military. On the other hand, some comments explained that dogs are military personnel, so it’s standard procedure to offer them seating when available.

“These dogs didn’t volunteer to serve in Afghanistan. I can’t understand why it would bother anyone to see dogs saved,” a Twitter user wrote.

Like most current events, it’s unlikely that everyone will agree, no matter how much information is presented. The military dogs were on the flight and flew safely to the US. We can’t go back and change the past. Yet, we can still hope that more lives will be saved. After all, arguing about what happened won’t make a positive impact.

If you would like to help provide assistance and medical care to families in Afghanistan, here are a few places to donate: