The Centers for Disease Control and Prevention announced that the ban was in response to an increase in dogs coming from high-risk areas with incomplete or fraudulent documentation regarding rabies vaccination. July 14th was the effective date of the ban.

“Due to reduced flight schedules, dogs denied entry are facing longer wait times to be returned to their country of departure, leading to illness and even death in some cases,”A June 14th CDC announcement stated.

The suspension applies to dogs that had been in the high-risk countries at any point in the prior six months—even if they arrive in the U.S. from lower-risk countries.

Since 2007, the United States has been exempt from dog-associated rabies. JAVMA asked CDC officials to respond to their questions. They expressed concern that a single rabid animal could infect the U.S. and reintroduce the canine variant. This would reverse almost 50 years worth of rabies prevention efforts that were made before the 2007 declaration that the U.S. had been declared free from canine rabies.

“If a rabid dog spreads the virus to a raccoon, skunk, or fox, the virus can rapidly spread among those wild populations and then back to other domestic dogs from encounters with wildlife,”The response reads:

The July ban provides exemptions for certain pets that are immunized by U.S. citizens and employees as well as dogs imported for scientific or other service purposes. However, the ban is expected not to allow entry to tens of thousands dogs that would have been brought into the U.S.

On the CDC website, you can find information about the suspension and exemptions as well as the application process to import dogs from affected nations. Up to Oct. 14, U.S. citizens can return dogs with import permits via 18 airports. These are listed in documents on the CDC website.

After that transition—with the exception of dogs imported for law enforcement—dogs approved for importation must arrive through John F. Kennedy International Airport in New York City, which at press time was the only approved airport for this purpose.

International leaders in animal shelter organizations stated that while CDC officials have a right to be concerned about rabies transmission they do not expect that the decision will affect projects that save dogs’ lives. 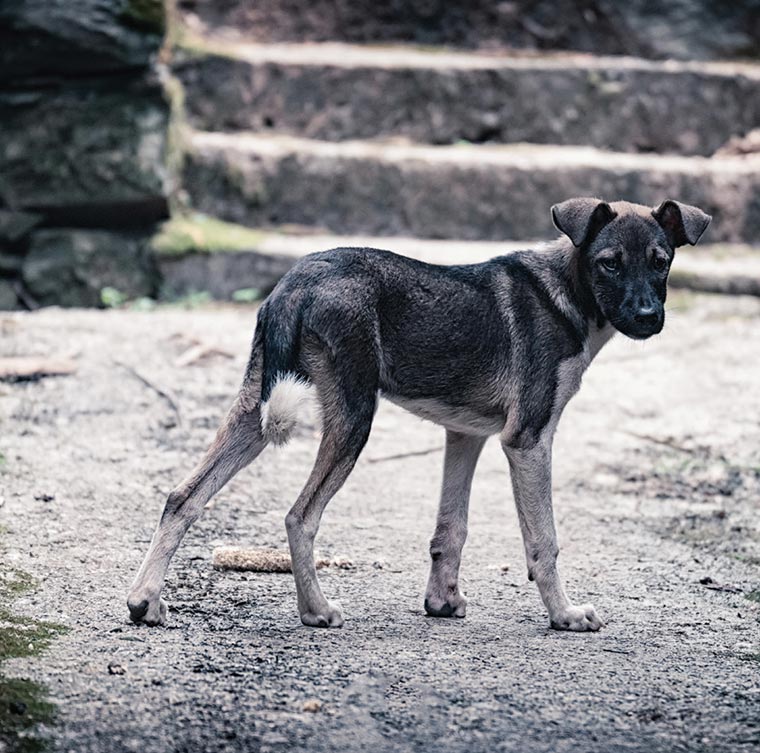 According to the Centers for Disease Control and Prevention, they are confident that they will be able to control and prevent any disease. “see some entities flying large groups of dogs from rabies high-risk countries to neighboring countries as in-transit shipments that are then transported to the United States via ground transportation at our land border ports of entry.”

Two years ago, the CDC had stopped importation of Egyptian dogs. This was to stop the reintroduction possible canine rabies virus. Three dogs were imported from Egypt in 2015-19. Each dog was brought in by a different rescue group and each came with documents certifying that the animal had been vaccinated against rabies.

More recently, on June 16—two days after the CDC’s announcement of the impending broader ban—a dog tested positive for rabies after arriving in Pennsylvania from Azerbaijan, one of the countries affected by the ban, according to CDC information. An animal rescue group imported 33 dogs and one cat to the dog.

All other animals, as well as at least 19 individuals were exposed to the rabid dogs. CDC officials coordinated with federal health officials from eight states to find the animals and respond to the disease.

The High-Risk Areas include large parts of Africa, Central, South America, Asia, Central and South America as well as Eastern Europe, Central America, Asia, the Caribbean and the Middle East. It is applicable to countries like Armenia, Brazil and China (excluding Hong Kong, Taiwan), Haiti, India and Nigeria.

Agency officials estimate importers bring about 1 million dogs into the U.S. each year, and the ban applies to about 6% of that total—60,000 dogs, according to a June 14 Federal Register notice. The notice says that the real number could be between 33,000 and 120,000.

Lori Kalef is the program director at SPCA International. She said that CDC officials have legitimate concerns. However, she and other SPCA International leaders hope to work together with the CDC, U.S. Department of Agriculture and U.S. Customs and Border Protection on better policies that will both reduce the agency’s burdens and ensure safety for dogs and people.

She suggested that this could include a stricter importation procedure, including mandatory microchipping and rabies serology testing.

Kalef predicts the ban enacted by the CDC will have a ripple effect on SPCA International’s programs, especially a project based in Iraq to reunite soldiers with the dogs and cats they befriended while deployed. The organization also works with animal shelters in 78 countries—most of which are affected by the ban—on trap-neuter-release programs, vaccination of stray animals, and adoption programs that often involve partners in the U.S.

“They rely mostly on adoptions overseas, primarily in the U.S.,”She spoke of shelters in partner nations. “And if the ban takes effect for the next year, what this means is that they can’t do more life-saving work within their countries and rescue more animals who are victims of illness, starvation, and cruelty.”

Dr. Katherine Polak works in Bangkok as the head of stray animal care in Four Paws International’s Southeast Asia operations. The Austria-based charitable nongovernmental organization’s work includes campaigning to end the slaughter of dogs and cats for meat, which, in turn, involves finding homes for animals when governments shut down slaughterhouses.

“To say that the international travel ban came as a shock would be an understatement,”Dr. Polak spoke. “As an international NGO involved in animal transport, we go above and beyond to ensure that animals are healthy, free of disease, appropriately quarantined and work only through a network of competent local partners and veterinary clinics.”

Four Paws tries to rehome animals locally first, but the organization has sent 46 dogs to the U.S. from Cambodia since 2019, Dr. Polak stated. She said that these imports have freed up shelter space and resources in Cambodia and made it possible for international shelter organizations to continue their work with dogs and people.

Dr. Lena DeTar is a member of the board of directors for the Association of Shelter Veterinarians, chair of the ASV’s Shelter Medicine Resources and Expertise Committee, and an assistant clinical professor in the shelter medicine program at the Cornell University College of Veterinary Medicine. She believes the ban will not have any effect on shelters or shelter veterinarians in the U.S. She said that most of the rescue groups involved in shipping dogs to the U.S. are small and foster-based, while larger shelters in the U.S. rarely import dogs from abroad.

Dr. DeTar said that the ban was more likely to be used for surprise imports of dogs than for imports approved in advance.

“The restrictions prevent surprise arrivals, which prevents those dogs from lingering in importation facilities without an outcome or being sent back and not having somebody at the origination country be able to take those dogs and care for them,”She spoke. 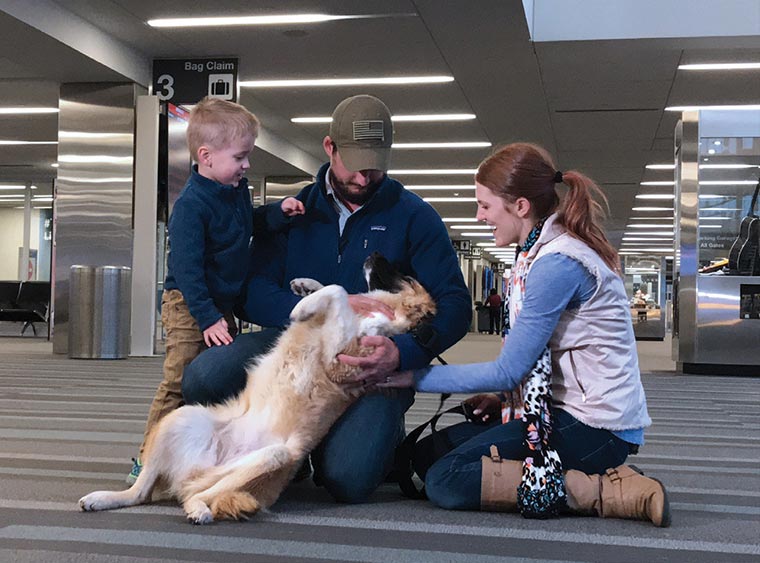 In January 2018, a U.S. Army combat medic from North Carolina was reunited to Annabelle, his dog who lived with the soldier in Syria. (Courtesy SPCA International)

Dogs and people are at risk from a growing problem

Animal brokers and rescue groups sometimes import 20-plus dogs via cargo plane. Others find it more convenient. “flight parents”According to CDC officials, there are people who will allow dogs to be checked in on commercial planes. Dogs often arrive in groups of two to three dogs, which can lead to the containers being stacked together or side by side.

“We also see some entities flying large groups of dogs from rabies high-risk countries to our neighboring countries as in-transit shipments that are then transported to the United States via ground transportation at our land border ports of entry,”Officials from the CDC wrote. “International rescue groups then rapidly distribute the dogs to other local rescue groups and shelters for final placement with families scattered around the country.”

The CDC documented more than 450 instances in 2020 of fraudulent, incomplete, or incorrect documents certifying rabies vaccinations among high-risk dogs. This was an increase of the 200 cases annually recorded over the years. Recent years saw some dogs refused entry due to rabies certificates that did not accurately reflect the breed, age, appearance, and microchip information of certain dogs. Others rabies certificates had suspicious veterinary stamps and inconsistent signatures. They also contained inconsistent vaccination dates or records of vaccines that were administered after the expiration date.

Federal Register notice declares that attempts to import more dogs not properly vaccinated dogs from high-risk countries endanger the public. They also state that animal management issues that can’t be sustained during the COVID-19 epidemic include the attempt by some importers of bringing in increasing numbers of dog animals that aren’t up to standard. Officials at the CDC estimate that the suspension or cancellation of imports of dogs from high-risk nations will decrease imports by 75%, and that there would be a 90% drop in the number of dogs refused entry to ports.

According to the CDC, animal management issues led to welfare concerns when airlines kept dogs in warehouses that were often not properly controlled, sanitary, or separated from hazardous materials. In August 2020, airline employees at Chicago O’Hare International Airport left 18 dogs in a cargo warehouse without food and water for more than 48 hours, and one of the dogs died.

Dr. Alicja izydorczyk, an international director of animal welfare for Soi Dog Foundation in Thailand, stated that the ban affects all dogs who have been carefully screened and vaccinated before being allowed to travel to the U.S. She also said that she was trying to get as many dogs as possible to partner rescues in America ahead of July’s deadline.

“The ban is devastating as it takes away the opportunity for these dogs, who have suffered so much, for a forever home in the USA,”She stated. “It also puts more pressure on our shelter here in Phuket, which is already at maximum capacity with 1,500 animals in our care.

“Every dog adopted is a celebration—not only does the dog get a home it truly deserves, but it frees up a space at the shelter, allowing us to save another animal in need.”

National Dog Bite Prevention Week will be held in mid-April