The Centers for Disease Control and Prevention made news earlier this summer when the agency announced a temporary ban on the import of dogs from countries at high risk for the canine variant of the rabies virus.

The CDC estimates nearly 1 million dogs enter the country annually, with 700,000 arriving via land borders and 300,000 by air. Approximately 100,000 of those dogs come from high-risk countries. 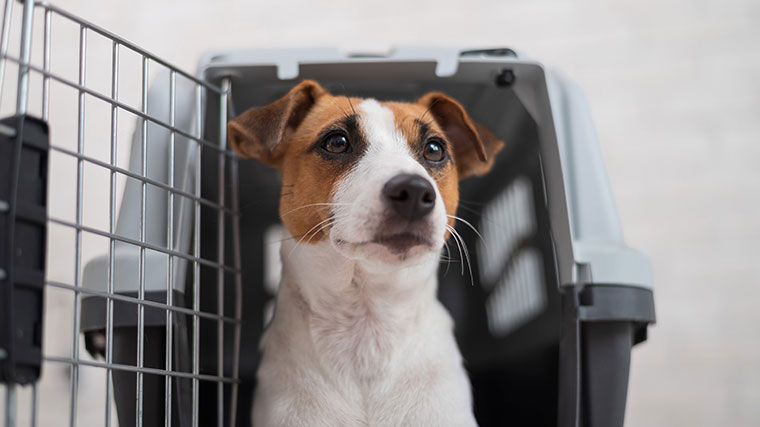 While the primary focus of the CDC’s ban is to prevent introduction of the canine variant of the rabies virus, multiple factors impact the health and well-being of a dog during travel, said Dr. Emily G. Pieracci, a veterinary epidemiologist with the CDC, during her presentation “International Pet Travel and Animal Importation: The Usual and Unusual Suspects in International Dog Movements” on Aug. 1 at AVMA Virtual Convention 2021.

“Young puppies are cute, and clients will often be asked to pay more for a younger dog, but it may not be safe for puppies to travel, especially over eight hours, until they’re older,” Dr. Pieracci said. “Helping clients understand what the travel process may be like for a young puppy can help clients make an informed decision. The same goes for educating them on the risks for brachycephalic breeds, mode of transport, and importance of routine vet care prior to travel.”

“Many organizations and importers will fly dogs as checked baggage because it’s less expensive than flying as cargo,” Dr. Pieracci said. “Also, entries may not be filed with Customs and Border Protection, meaning they don’t know how many dogs enter the U.S. or where they are coming from.”

This is why she recommends veterinarians be vigilant.

“As a practicing U.S. veterinarian, it’s important to understand that when you see imported dogs in your clinic, they may need additional care and treatment to ensure they remain healthy,” she said. “Many rescued dogs from high-risk countries, especially rescued street dogs, may have an increased prevalence of certain diseases, including rabies and parasitism, perhaps due to free-roaming behavior combined with lack of access to routine veterinary care and routine vaccination.”

Two other recent incidents also underscore the need for vigilance by veterinarians when clients bring in dogs adopted from abroad. This past May, a dog from China that had been imported by one rescue group was then given to another. The dog was healthy when it arrived but later tested positive for Brucella canis.

Also in May, another dog arrived from China as well and developed a cough four days after arrival. It presented to a local veterinarian as lateral recumbent but able to rise, afebrile, and with bilaterally increased lung sounds. The dog had influenza A. Two other dogs in the shipment had also developed respiratory signs but were not tested.

When a sick or dead dog arrives at a port of entry, customs will notify the CDC to see whether additional testing is needed. The CDC is limited in what it can require testing for as a regulatory authority really focused on rabies.

“There’s no standard operating procedure that outlines which dogs should be tested for what. Everything is done on a case-by-case basis,” Dr. Pieracci said. “This can lead to missed opportunities to detecting diseases of concern.”

To try to get a better handle on causes of death and illness for imported dogs, the CDC did a data analysis, which is currently under review for publication.

From 2010-18, 92 dog deaths were reported to the CDC. Necropsies were performed on 37 of the dogs, and 13 were tested for rabies. Brachycephalic syndrome accounted for most deaths, at 17; followed by undetermined, at 12; ill thrift or dehydration, malnutrition, or poor body condition, at five; and infectious disease, at three, along with one each of rabies, distemper, and parvovirus.

Some of the dogs noted as dying of ill thrift or undetermined had limited diagnostics performed, so they may have had underlying infectious etiologies that were not identified.

Also from 2010-18, 84 dogs were reported to the CDC as sick on arrival. Among the 60 dogs for which medical records were available, diagnoses included the following:

Further, the CDC analyzed 14,000 case reports from imported dogs during 2010-18 to assess the risk of illness or death, which the agency calls adverse events, during travel. Officials examined brachycephalic breeds versus nonbrachycephalic breeds, mode of transportation, country of origin, and size. Age was not assessed because of data limitations.

The results indicated the following:

With a new dog, Dr. Pieracci said, it’s important to take a thorough history, to find out how the client obtained the dog, and to ask about the international travel history of the pet. Did the client buy online? Did the client visit the breeder to see where the dog was born and raised? If the dog is from abroad, she suggested verifying that all vaccinations the dog received meet the standards of the U.S. Department of Agriculture’s Center for Veterinary Biologics and state requirements.

“Many clients are unaware their dogs were imported from overseas,” she added. “Ask to see all medical records and documentation that accompanied the dog. Make note of any documents that are not in English or contain addresses in foreign countries.”

Veterinarians should consider reporting to their state veterinarian if they notice any sick dog with a history of international travel in the previous six months or international vaccination records that don’t match the age and appearance of the dog. In fact, practitioners should consider revaccinating dogs with any discrepant medical records as the dog may not be adequately protected against diseases such as parvovirus, distemper, and rabies, she said.

To help prevent the importation of zoonotic diseases of concern, veterinarians should do the following: